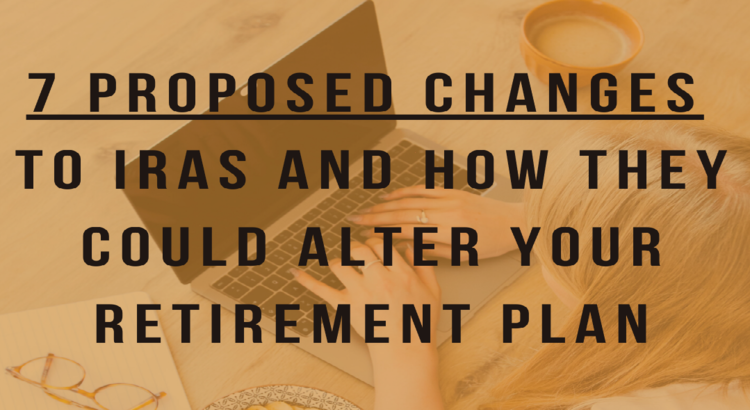 If passed, the most recent proposal from the House of Representatives “Ways & Means” Committee could have a dramatic effect on your retirement plan. Or it might not change anything. However, If your are managing your own retirement investments it’s important to be aware of these changes. Though the proposed amendments mostly target ultra-high-end investors with huge account balances, they also unfairly burden a wider swath of middle class investors. Here we are focused on changes to the rules surrounding IRAs and other tax-sheltered accounts, but I do recommend reading the not-so-dry full proposal here – all quoted sections below are attributable to that page unless otherwise cited.

This law applies to very few investors and on its own, it appears to change very little for the ones it does apply to:

High income investors, defined as taxpayers earning between 400K – 450K per year depending on their tax filing status, can no longer make contributions to an IRA that has a total value of $10 million. You may be saying, “big deal”, if your IRA hold $10M then a ~$6K annual contribution is meaningless as you could easily generate tens of thousands of dollars with the capital already in the account. And you would be right, if it weren’t for the next section which limits total combined account balances.

If an individual’s combined traditional IRA, Roth IRA and defined contribution retirement account balances generally exceed $10 million at the end of a taxable year, a minimum distribution would be required for the following year…

Much like section 138201, for most of us this proposal means very little. It’s mostly meant to target billion dollar IRAs like Peter Thiel’s. However, If a high-income investor’s combined IRA accounts exceed $10 million, a required minimum distribution would be required to bring the account back down to $10 million. Not a bad problem to have.

Sec. 138311. Tax Treatment of Rollovers to Roth IRAs and Accounts.

In order to close these so-called “back-door” Roth IRA strategies, the bill eliminates Roth
conversions for both IRAs and employer-sponsored plans for [high income investors].

Here’s where the proposed laws create issues for a much larger number of investors. This section impacts all high-income investors (HIIs), regardless of their account size. Sec. 138311 would put a stop to “backdoor” Roth IRA conversions for HIIs. These conversions are popular among investors who have income levels that are too high to contribute to Roth IRAs directly, but, for some reason, believe that paying taxes now is better than paying them when they retire and would ostensibly have a much lower tax burden. If you strongly believe that taxes are going to go up by the time you retire, whether due to your future income or the tax code, the good news is that you can still access this strategy if you earn less than 400K a year (450 if filing jointly).

This provision would also put a halt to the “mega-backdoor Roth” strategy – a complicated scheme wherein a 401(k) plan that specifically allows for after-tax contributions (taxable investment earnings) is converted to a Roth 410(k) or Roth IRA, which enjoys tax-free earnings. Done correctly, this strategy can currently be used to significantly increase the amount of money an investor can shield from tax annually. The mega-backdoor strategy would be prohibited for taxpayers of all income levels if the proposed laws are passed. To me, this is another rather obscure tax loophole and it doesn’t bother me one way or the other.

The bill prohibits an IRA from holding any security if the issuer of the security requires the IRA
owner to have certain minimum level of assets or income, or have completed a minimum level of education or obtained a specific license or credential. For example, the legislation prohibits IRAs from holding investments which are offered to accredited investors because those investments are securities that have not been registered under federal securities laws. IRAs holding such investments would lose their IRA status. This section generally takes effect for tax years beginning after December 31, 2021, but there is a 2-year transition period for IRAs already holding these investments.

With this proposal a huge swath of additional investors and small businesses will be negatively impacted. An Accredited Investor is someone with:

This bill would prohibit any investment in an IRA that requires accreditation. What’s more, it would require currently-held assets to be sold or distributed within two years.

The major problem with this proposal is that we’re no longer talking about the mega-wealthy here, this hurts middle class investors who don’t make the majority of their earnings from investments. This also harms small businesses as the vast majority of Regulation D (private equity, rather than public stock) offerings are made to accredited investors. Further, these investments are typically not highly liquid for investors, or their current value may be unknowable. Even with the 2023 deadline many investors are going to have their investment assets distributed. That means that these investments will be forcefully removed from tax-sheltered accounts, taxed at their income-tax level, penalized for early withdrawal and placed within taxable accounts so that future earnings are also hit.

.The bill clarifies that, for purposes of applying the prohibited transaction rules with respect to an IRA, the IRA owner (including an individual who inherits an IRA as beneficiary after the IRA owner’s death) is always a disqualified person.

This section formally states, where it was once assumed, that the IRA owner (you) is not allowed to engage in IRA activities that might benefit the owner personally. However, there have always been prohibited transactions for disqualified persons.

The following are examples of possible prohibited transactions with an IRA.
– Borrowing money from it
– Selling property to it
– Using it as security for a [personal] loan
– Buying property for personal use with IRA funds

If you own rental real-estate in your IRA, for example, disqualified persons are not allowed to use personal money to fix it up, or to even put in “sweat equity” by painting or DIY projects. Related: 10 DIY Home Maintenance and Repair Jobs That Save a Ton of Money. All the money for the IRA asset must come from the IRA, which is why the LLC option is so attractive. Having an LLC in your IRA allows you to use a business bank account to fund IRA expenses with a checkbook, hence the reason these setups are often called “checkbook IRAs”.

Sec. 138313. Statute of Limitations with Respect to IRA Noncompliance

This one is fairly self-explanatory as well as innocuous. It simply means that the IRS has a longer time to investigate “prohibited transactions” (as described above). This likely also indicates that the IRS is backlogged and underfunded. Not surprisingly, the Ways and Means proposal also provides for a $78 billion allocation to the IRS to improve technology and make tax collection more efficient. Having worked with the IRS for most of my career I can attest to fact that funding is needed. they are still using fax machines, old computers and under trained personnel. I’m not sure how they came up with that figure though.

Sec. 138314. Statute of Limitations with Respect to IRA Noncompliance

To prevent self-dealing, under current law prohibited transaction rules, an IRA owner cannot invest his or her IRA assets in a corporation, partnership, trust, or estate in which he or she has a 50 percent or greater interest. However, an IRA owner can invest IRA assets in a business in which he or she owns, for example, one-third of the business while also acting as the CEO. The bill adjusts the 50 percent threshold to 10 percent for investments that are not tradable on an established securities market, regardless of whether the IRA owner has a direct or indirect interest. The bill also prevents investing in an entity in which the IRA owner is an officer. .

One investment option that has become popular with self-directed IRA investors, is the “single member LLC.” The creation of single-member LLC allows individual investors to form businesses within tax-advantaged accounts like IRAs, in order to gain the legal protections of an LLC. The proposed changes to would put an end to single-member entities and limit an investor’s interest in a company that they are investing in, to 10%. Investors would be required to buy their asset directly in their IRA, thus shedding the LLCs protections and would have the same 2 year deadline to sell or distribute extant LLCs.

Related: 5 Tax-Sheltered Investments That You Didn’t Know About

Though most of the proposed laws regarding IRAs would put an end to tax-loopholes and obscure strategies utilized by the mega-wealthy, the limitations on private placements and single-member LLCs, and burden to holders of these assets, seems particularly unfair. Not to mention the impact on small businesses who offer private equity offerings or aid clients in forming and administering single-member LLCs. Imagine investing in risky but potentially lucrative shares of a start-up company, only to find out that you are being forced to liquidate these assets early, even if there is no current buyer or tangible value, or else pay taxes and early withdrawal penalties of 10% of the distribution.

Similarly, if you might spent thousands of dollars forming a LLC within your IRA. There are attorney’s fees, IRA administration and custodial fees, asset expenses, bank fees and more. So, the prospect of having to unwind your newly formed entity would be financially damaging to say the least. A lot of the investors I have worked with in the alternative investment space are normal people, not multimillionaires sheltering huge sums from tax, and it is those investors that are harmed the most by this proposal. If we aim to limit the wealth creation of billionaires, I think it can be done without doing so much harm to middle class investors and the small businesses who service them.

Why I Chose to Pay the Health Insurance Penalty and What it Really Costs
The Pros and Cons of Rapidly Paying Down Your Mortgage
How to Refinance Your Student Loans and Why It’s Important
5 Money Hacks That Don't Save You Money (And 5 That Do)
5 Controversial Personal Finance Rules That I Live By
The Valuist Investment Portfolio: The Only Free Lunch in the Stock Market

5 Ways That Working From Home Can Make You More Money
The Interest Free Loan You Give the Government Every Year
The Problems With Rental Real Estate and How to Overcome Them
The Pros and Cons of Rapidly Paying Down Your Mortgage
The Valuist Investment Portfolio: The Only Free Lunch in the Stock Market
The 5 Best Money Moves to Make When Inflation Is High