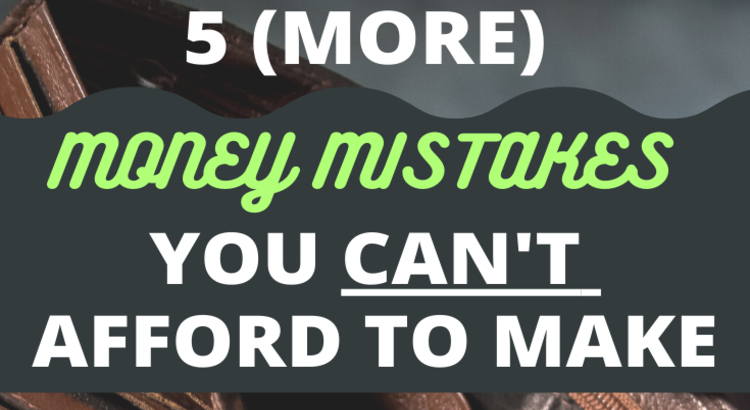 One of the most popular early posts by Valuist is, 15 Money Mistakes You Can’t Afford to Make. But over the last few years I’ve made (and hopefully, learned to resolve) at least a few others. The more complex our finances become and the more responsibilities we undertake (like…kids) the savvier we’ve had to be with our money. And, as time passes, it becomes easy to lose sight of our initial, likely idealistic, personal finance goals.

So, in an attempt to take stock of my F.I.R.E goals I am updating the Valuist money mistakes list to include 5 more money mistakes that you can’t afford to make. These one’s are more abstract than the first 15 but they are nonetheless crucial to avoid when attempting a goal as monumental as financial independence.

“Opportunity Loss,” also known as regret, is any time that you don’t take an action that would have earned profit without added risk.

Here are some of the most common opportunity losses:

According to Fidelity, among other sources, the general rule of thumb for retirement savings is to have, “1x your salary by 30, 3x by 40, 6x by 50, 8x by 60, and 10x by 67.” This is only possible by investing early and consistently, and through the magic of compounding returns. The later you start, the more you have to contribute to catch up which reduces your ability to live well now.

I avoided that particular mistake but I often hold too much of my portfolio in cash. Having cash is not a bad thing on its face, especially since you can deploy it during market crashes to make a ton of money. I’ve always felt most comfortable with a relatively large amount of cash, both because of its liquidity and because the remainder of my portfolio is invested in stocks, which are more volatile than many other popular investment vehicles (like bonds and CDs). Cash also represents freedom to me. If I have cash-on-hand I never have to worry about losing my job or unexpected expenses. The problem with holding a lot of cash, though, is that cash loses value over time due to inflation. Not investing all but a necessary emergency fund is a sure way to lose money through a loss of opportunity.

Lastly, in my opinion, young investors in the acquisition phase shouldn’t hold conservative investments like bonds and CDs. Not unless they have a very low tolerance for risk. Not investing in stocks, especially broadly diversified, total-market, index funds, is likely to represent an opportunity loss of hundreds of thousands of dollars by the time you retire.

Related to opportunity loss, but perhaps easier to conceptualize, not getting paid what you’re worth results in significantly less money over the course of your career. As Valuist covered in, 5 Things to Do Before Asking for A Raise, with focused intention getting a raise isn’t all that hard. So, there’s no reason you shouldn’t be trying to secure better pay if can truly justify it.

Some of the reasons employees don’t get paid what they are worth:

The early development of passive income sources can be a huge boost to your financial independence goals.

Here are some of Valuist’s favorite passive income streams

Money Mistake #19. Not Leveraging Your Expertise

The only way to develop stable passive income is to start leveraging your valuable skills. Though the distance between what you know and what you can sell may be vast, taking the first step is crucial in the long run. One of the biggest money mistakes I make is by not monetizing my hard work. Valuist.com still isn’t directly monetized with ads or affiliate links. Also, I give away my best products for free. And though Valuist does make money in other ways (being offered paid projects/consulting) I am definitely not maximizing potential earnings.

I have been afraid to explore other revenue streams until I have the right amount of traffic, the right feedback and the right position on Google but the consequence is that I am sacrificing potential income that I could earn without much additional effort. For this reason, I am considering ways to ethically monetize my blog and the tools Valuist has created for its subscribers, that are currently available for free.

Money Mistake #20. Working Too Many Hours

You may be asking, “Why is working too hard a so-called money mistake? Doesn’t working more lead to higher pay? Are you stupid Jake/Valuist or whatever you call yourself?” Well I don’t discount the possibility that I’m stupid, but I assure you that working too many hours is one of the biggest money mistakes you can make. Being in a “work more” mentality often precludes you from being in an “earn more” mentality. Despite what the side-hustle heroes on Twitter would tell you, achieving a balance between pay and free time is superior to maximum earnings because time is our most valuable resource. What good is is making a lot of money if you have to sacrifice your freedom?

15 Myths About Recycling, "Going Green", and Sustainable Living, Debunked
How to Access Your Retirement Money Early, Without Penalty
7 Proposed Changes to IRA Accounts and How They Could Alter Your Retirement Plan
The Valuist Financial Independence and Retirement (F.I.R.E) FREE Calculator Tool
5 Ways That Working From Home Can Make You More Money
How to Do Financial Analysis: The True Cost of Switching to Solar