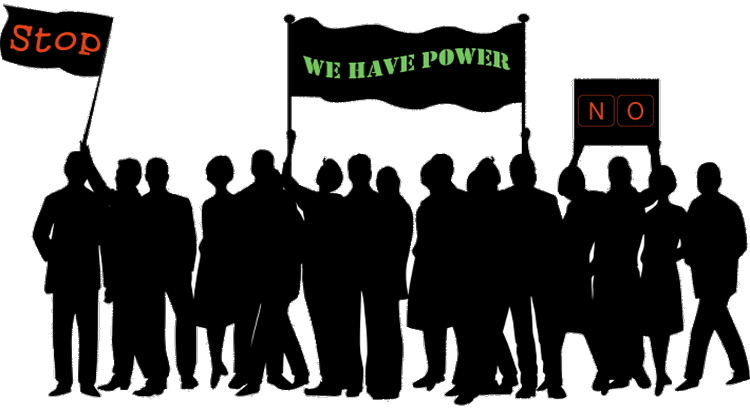 The following is a Guest Post by Strangers to Creation author and retired healthcare investigator, Kevin Nelson, who recently undertook (and won) an old-school protest… with signs and everything. The details of his story are so intriguing, so fascinating, so raw that I had no choice but to publish his exposé as the first guest post on Valuist.

Have you ever experienced that horrible combination of absolute fury and utter impotence, where your gut constricts to a sheer vise grip on your innards, and are flooded by the despair that results from having no release for the toxic emotions stewing at the base of your brain?

Of course, you have. Life offers us many opportunities for such feelings. But the chances of this increase dramatically when trying to resolve problems with a bad company.

You can’t always fix life, but you have more power with bad companies than you may have known.

How to Win a Protest: Bad company blues

My daughter had been living an 18-month nightmare at her apartment complex. She did not have heat in the winter for three months, they towed her car even though it was parked in her reserved spot, she couldn’t drive to college sometimes because they never cleared the snow in time and trash piled up and blew in the fields. If she did not comply with stupid rules she was threatened with eviction and if she complained she was berated.

I lived in another state during that time so when I recently returned to Denver, I began the process of getting all her backed-up repairs done. My problems started the first day on the job. I called in the morning to get a serious water leak repaired. I called throughout the day but no one came. Fifteen minutes before closing time my daughter and I went to the office. She complained in an agitated but low voice that the repair wasn’t getting done, whereupon the manager rushed over and told her, “I need you to keep it down.” When I objected, she told me to leave the office or she’d call the police.

I can tell you that I rarely have never been so motivated to get justice. Here’s what happened which I have generalized to serve as an approach that everyone can take.

How to Win a Protest: Going up chain of command

With a bad company, you can expect that you won’t get any relief here, but you do it to show everyone you have good intentions and mature.

I was repeatedly ignored, hung up on and insulted. When I finally got a hold of a manager by email, she responded with a “final decision” that I was wrong and they were going to assess us a fine for “disrupting business operations.”

That’s why you document everything. During this seemingly futile stage, I wrote down every conversation and the date, time, person, title and results. You see, the more you document, the more accurate you are and the more persuasive your argument is.

I responded to the rebuff and fine with a 2,500-word carefully-worded email describing my daughter’s year and a half long nightmare and all the details of my intervention including horrible customer service at the corporate level.

You also have to research. I read everything I could about the corporation nationwide and included this in my email to show them I was informed and I even tried to trick them into thinking I was intelligent.

Be polite, personable and calm.

This is the right thing to do, shows that you are reasonable and even rude people will be nicer when you are kind, respectful and even sympathetic to their problems.

My email worked to the point where the corporate manager called me and we reached an amicable agreement where no fine would be assessed and she apologized for not returning my calls and her rude staff. But she said that compensation could only be determined by the local manager (who had been so rude to my daughter and me) and the local manager would contact me in two days.

Well, the local manager did not call me back. Two weeks had already passed and since they were not taking me seriously I made my plans for going to war.

Now, I had already set the stage in all my emails and voice messages that I was resolute (retired with nothing else to do but help by daughter, competent (I emphasized my investigative, regulatory and legal experience) and morally outraged (a father fighting for his daughter after 18-months of mistreatment).

But they obviously weren’t impressed by this since they kept blowing me off.

Strategy, at this point, with a bad company, is about causing them pain. What’s their weak spot?

How to Win a Protest: Picketing – the right strategy in this case

The idea to picket was an easy one to come up with. It had become so obvious from my observations and research that this corporation only cared about making money and getting new customers to sign contracts. So, I decided to really “disrupt business operations.”

I called around and informed the police that I was going to picket the company legally (on the sidewalk right in front of the resplendent apartment complex “clubhouse.”

I made my sign telling everyone not to rent there – just read the online reviews.

You’ve got to stand your ground though. One of the young office ladies came out yelling at me that “I was disrupting company business” which I thought was observant on her part. They called the police and later in the day issued a trespassing and arrest notice to stay off the property (so I couldn’t go to my daughter’s apartment that I was paying for).

All this, intended to intimidate me, just showed me how much I was hurting them.

Meanwhile, apartment customers, obviously fed up by bad treatment, were honking their horns, giving me the thumbs up and a few even joined me on the frontlines. One guy advised to start a Facebook page for the “protest” which my daughter set up. And I believe I turned at least one potential customer away after talking to her.

The outpouring of support must have really frightened the company because early on day two, they caved and gave in to my demands (including $500 in rent concession for my efforts).

It was a wonderful experience overall. I not only prevailed with a bad company but I truly enjoyed the sense of community I experienced during those two days of picketing.

Poor, Cheap or Minimalist?
These 10 Money Habits Will Make You More Money in the Long Run
The Valuist Investment Portfolio: The Only Free Lunch in the Stock Market
5 (More) Money Mistakes You Can’t Afford to Make
Simplicity Is Often the Key to Financial Success
5 Things I Learned While Working From Home

10 Reasons Why Owning a House Is Better Than Renting, Even When It's More Expensive
5 (More) Money Mistakes You Can’t Afford to Make
These 10 Money Habits Will Make You More Money in the Long Run
Does Money Buy Happiness?
Poor, Cheap or Minimalist?
The Valuist Investment Portfolio: The Only Free Lunch in the Stock Market