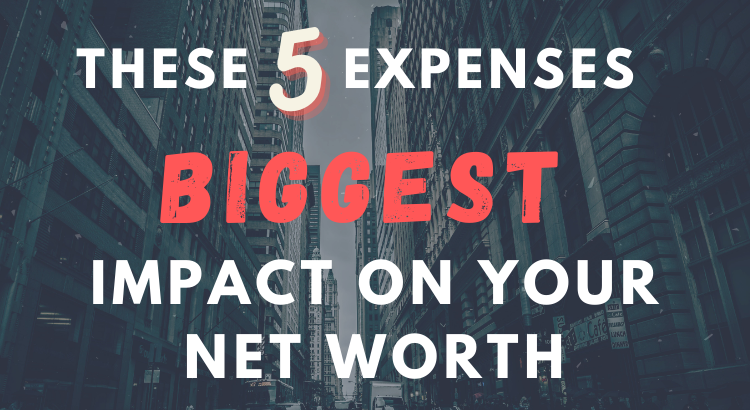 There are some expenses you just can’t avoid, like taxes, health care and funeral costs. Sure you can maximize your tax savings and try to avoid overpaying for health insurance, but generally we must live, and die, with these costs. However, you can control most of your other big-impact expenses and with a little foresight, you can use these budget and investment adjustments to supercharge your net worth.

Control these expenses to increase your net worth potential

#1. The high cost of education

I once wrote an article about the true value of a college degree and since then, things haven’t improved much for brick-and-mortar educational institutions. College enrollment costs have continued to soar while enrollment rates have rapidly declined. Meanwhile, receiving at least an undergraduate degree is still considered a rite of passage for many good employment opportunities.

But there’s hope…still. Beyond some of the tips we mentioned last time we covered this topic – like evaluating loan repayment terms against your prospective salary, applying for scholarships and loan forgiveness, or considering quality foreign universities – there are some other great ways to control the cost of getting a degree.

Housing costs are the biggest expenses most of us will ever have to cover, and they never go away. Even after you pay off your home loan, you are still obligated to pay property taxes, utilities, HOA dues, maintenance and upkeep. With the housing market increasing in value at such a rapid pace recently, It’s easy to feel disenchanted about the prospect of ever purchasing a property, let alone paying one off, but there is good news –

There are steps you can take to significantly reduce your housing expenses and increase your net worth over time:

Watching children all day, especially several of someone else’s children simultaneously, is incredibly challenging. I would think, I’ve only watched my own kids and usually not all day alone. However, after having two kids in full-time daycare and pouring over the quotes from local facilities (all between $1350 – $1,500 per month), I’m still not sure it’s a hard enough job to justify the enormous costs. Or, maybe it is, it’s not like these places are hurting for business. In my attempt to lower our cost of child care, I recently contacted several facilities in my area but only one place had an opening for a toddler. Thankfully my son is already in an equally expensive program that we were “waitlisted” at for several weeks before earning entry. But when he gets has a high temperature he has to be out of daycare for 72 hours, which usually equates to us paying for an entire week of child care, while taking time off of work to care for him. For comparison, many places operate on a 24 hour rule and though I understand an abundance of care, he has probably only gotten sick from his daycare.

However, there are ways to save money on child care, especially with the ever growing mobile workforce:

Though this is a general category, lifestyle choices account for an incredible amount of overspending. The brands that you are aware of have spent billions to make you aware of them and they typically pay for all that advertising by providing a mediocre product at a higher price point. Though it’s difficult to stop allowing brands define your so called “status”, if you can distance yourself from marketing messages you can save a lot of money over time. Everyone seems to know that many brand-named products have equally viable off-brand counterparts, but fewer people are actually purchasing those off-brand products. I once read a story about a tennis ball supplier that would receive a shipment of balls, split them into two equal groups and put half into off-brand labeled containers and half into containers of a well-known brand. Though conjectural without reference, I don’t doubt it at all.

You may also experience some interesting personal benefits when you start reducing the number of times that you update your phone or buy a new car. I had a flip phone up until early 2020, when it was just becoming cool to have one again. I admit I held out too long but now that I have an iPhone 6s, it feels like such a huge jump in functionality that I have been satisfied ever since I upgraded. Similarly, my first car was a 1989 Isuzu Trooper, my next car was a 2004 Nissan Altima and my most recent vehicle (or whatever you would call it) is a 2015 Dodge Journey. With each new car I immediately experienced entirely new functionality, technology and safety features that would have been a lot less meaningful had I purchased a car every few years. Not that I recommend holding on to less safe, outmoded vehicles for a long time in order to save money. But it does make sense to keep analyzing the market and only buying a car when it becomes necessary to improve on safety or reliability.

Why Excellent Clients Should Demand Excellent Service
The True Cost of Buying a Home
5 Unavoidable Obstacles Freelancers Face
How to Access Your Retirement Money Early, Without Penalty
6 Steps to Establishing Excellent Credit
How To Move Long Distance & The True Cost of Moving