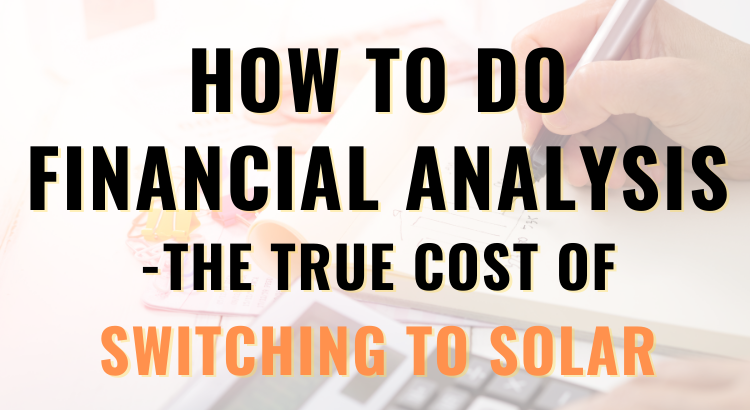 In school math definitely wasn’t my passion. I didn’t have a talent for it the way I did for music and the liberal arts. It wasn’t until after college, where I double majored in the non-math-centric fields of humanities and philosophy, that I started gravitating to numbers. Because I became interested in personal finance and investing, I soon also became highly motivated to learn financial math, which eventually led to my current career. Emerging from a world of subjectivity, I find solace in the consistency of numbers. 1 + 1 always equals 2 and nobody’s opinion or emotional state can change that. Probably.

However, though numbers don’t lie, people do and if you don’t know how to do basic financial analysis, it’s difficult to make informed financial decisions. In this post I will scrutinize a real proposal for solar power that was given to my mom, to show how marketers pump up the perceived value of their products. I’ll also demonstrate an interesting method to net over $23,000, by switching to solar power, despite the fact that in this case solar power costs more .

Reviewing the Numbers Behind a Proposal to Switch to Solar Power

Part One: Selling the Problem

When selling something it’s often best to first sell the problem. That is, focus on convincing customers that they are facing a dilemma and then be first in line with a convenient solution. With solar power, selling the problem should be pretty easy. People are generally aware that the long term use of fossil fuel is not sustainable and “going green” is as important as it is trendy right now, even if it’s not always as effective as it seems*. But because the plea to a potential customer’s morality isn’t always enough, marketers also play around with the numbers to misrepresent value in other ways, such as projected total savings.

The first way that this particular solar power company attempts to, “sell the problem,” is by making it appear that my mom’s annual electricity will rapidly increase in the future. They apply a 4% “cost escalator” to her initial annual electricity expense ($900), to show her total payment after 20 years at about $27,000. That’s despite the fact that electricity costs have only increased by 1.8% per year on average in the last 25 years*. By more the doubling the expected annual increase, this company is able to provide savings regardless of which payment option a customer chooses. But more on payment options later.

*According to the U.S. Energy Information Administration,

The Difference Between a 4% Annual Increase of Bills and a 1.8% Increase:

Using a more reasonable figure for total electricity cost after 20 years, $21,437.34, let’s see how that total cost of doing nothing compares with the total cost of solar panels. Keep in mind that for the purposes of this analysis, I am assuming that 100% of my mom’s electricity needs would be met by the solar system and that the loan for the purchase of solar equipment is the only expense.

Along with a monthly bill that is purported to be less than her current utility bill, this solar power company is offering $0.00 down on the purchase of solar panels. The entire cost of the solar equipment is wrapped into a low cost loan. That sounds pretty good at first glance, but the numbers tell a different tale. In their proposal, this company provides two repayment options, $108 per month for 20 years or $80 per month for 20 years.

The first problem is that $108 per month is $33 more than what my mom spends for electricity on average. Second, the representative told her that her monthly cost would be $70, a little less than the $75 she pays. Third, he didn’t mention that in order to secure a lower monthly payment, actually $80/month, my mom would have to pay her $6,000 “solar energy tax credit,” back into the loan. The tax credit for switching to solar is actually non-refundable. It can only reduce taxes owed or be carried forward to future years, it’s not like she would be getting a check for $6,000 in the mail.

But let’s assume she can access that $6000 from the solar credit in cash. I know of one way to attempt that, but it’s complex. She could, for example, adjust her W2 to withhold less, or stop withholding altogether and subsequently pocket more from her paycheck each month (knowing that the solar tax credit will offset the withholding deficit). But the timing for that kind of maneuver is difficult to get right. Even if she does get the money from the tax credit, that’s hardly $0.00 down, that’s $6,000 down and it’s usually not a good idea to put so much cash into low interest loans.

Let’s take a look at how the total cost of the solar panel loan compares with doing nothing:

With Option 1 my mom would lose $4,483 by switching to solar and with Option 2 she would only save about $110 per year. In their proposal, the solar company reports their total savings projection (about $9000!) over a period 25 years, despite having a 20 year contract. They also base this projection on the lowest repayment plan only and again, assume a 4% increase on her current electricity bill each year. The $9,000 savings they project is a far cry from what we see so far.

Part Three: The Power of Opportunity

Usually that would be the end of the story and the summary would be that if my mom doesn’t mind paying $30+ more a month for electricity one day 20 years down the road, she may have no utility bill. But even that is a best case scenario as there would likely also be some maintenance expenses on the system over 20 years.

She could also take $6,000 in cash and put it into her inexpensive-to-service loan, but this would be a money mistake we already covered called opportunity loss.

Related: This Is Why Being Debt-Free Is Overrated: The Math Behind Opportunity Cost

However, for the sake of argument suppose she does get $6000 from the credit by adjusting her withholding and saving the extra income. If, instead of putting that cash into a 1.4% loan, she puts it in an brokerage account that returns an adjusted 9% for 20 years, let’s see how that changes things.

My mom would still lose the same initial $4,483 over 20 years but because she invested the $6,000, instead of applying it to the loan, she earns a net gain of $23,144*. In the second option example we can see that even though she would save $2,237 after 20 years by paying down the loan, the opportunity of loss from not investing, 9% return on $6,000 after 20 years, minus the initial $6,000 investment, results in a long-term loss of over $25,300. So, using any money gained as a result of switching to solar, to pay the loan, or pocketing it, would be a mistake in the long run, given the long-term average return of the total U.S. stock market or S&P500.

Here is the same example but after only 10 years. From this we can see that neither option is particularly attractive in the first decade without respect to the credit. One option loses my mom $3,200 and the other just about breaks-even. However, when you include the profit from investing the $6,000, she still ends up $5,000 ahead.

Beyond the cost of the loan itself, there are other potential expenses to consider. Depending on climate conditions solar panels can suffer from up to 7% energy loss due to the accumulation of dust and debris, so it’s necessary to have warranty coverage for, “soiling”. Also, make sure that the loan really is the only cost and that the permits and installation is covered by your monthly payment. Lastly, it’s really hard to shake the utility company, you will still be charged for connection to the grid and any energy you use from the utility during low solar production months.

Your utility bill may include :

This was only one example but reflective of the average proposal that I evaluate. Whether or not switching to solar power is a good idea ultimately depend on your energy use, the cost of panels and the proposal in front of you. You may be hesitant to accept a higher monthly payment, or be turned off by any misrepresentation of value that you uncover, but if you truly want to be more energy conscious, it may still be worth it to switch to solar. Especially if you can harness the power of investing with any money received for switching. For this particular deal though, the value isn’t there unless my mom takes some extraordinary steps.

How to Access Your Retirement Money Early, Without Penalty
Poor, Cheap or Minimalist?
Two Weeks Backpacking in Nepal for $350
5 Times When Big Spending Pays Off (And 5 Times It Doesn't)
How to Buy Houses in a Highly Competitive Real Estate Market
The True Cost of Buying a Car: 5 Common Costs and How to Cut Them Down