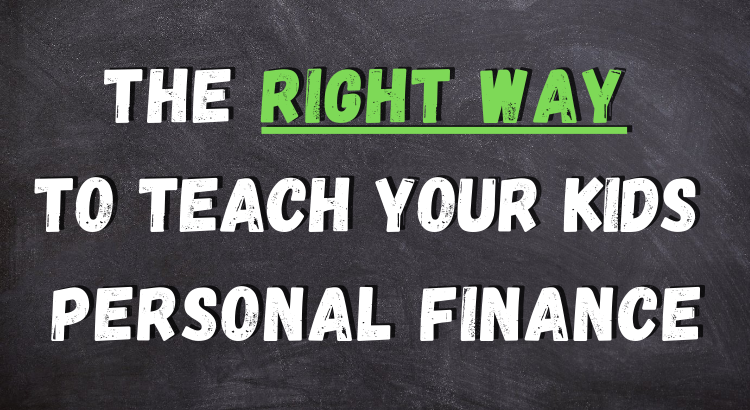 I’ve come to terms with the fact that U.S. schools probably won’t be teaching my kids, or your kids, about personal finance. They don’t teach them how to stick up for themselves, how to think critically, or a slew of other important stuff either. With my background, I think I can do a decent job teaching some of that, however, since some parents don’t, or can’t, fill the gap, many kids become disadvantaged in ways that have a life-long, negative impact. So if the schools won’t teach personal finance, we need some solid guidelines to teach financial wisdom to our children. In this article, I attempt to do just that, to expound on some time-tested, common sense approaches to teaching personal finance to kids, in an effort to better educate them on one of life’s most important lessons.

The best ways to teach your kids about money

1. Don’t actually mention “money” too much to your kids

If a family is well-off, discussing the amount of money that the kids will inherit can easily distract them from developing the traits and taking the risks required to earn it. Conversely, if a family is struggling to save money, mentioning financial woes could cause your kids to fear making money decisions. In any case, it’s more important to focus on developing leadership skills, than to ascribe importance to something as abstract as currency, at least at first. And, when we do start speaking to our kids about money, I think it’s best to do it in a specific context, like through an allowance, or by demonstrating how a home purchase works.

Kids initially learn, and then reflect, a scary amount, purely through their observations of the world around them. At first they acquire speech, mimic body language and reflect our mannerisms, but later they can even pick up our bad habits. The problem is that it’s hard to demonstrate good personal finance habits if you haven’t developed them. However, just acknowledging that some of your habits probably shouldn’t be, “passed down,” is a good enough starting place. I often find that when my children are the motivating factor, I am better able to make personal changes for their benefit.

3. Test your kids financial instincts early and talk to them about their decision-making process

There was a video circulating on social media with a young dad rapid-fire asking his very young daughter about certain tenets of personal finance, to which she just as quickly responds with an advanced but memorized script. I won’t post the video here because I don’t intend on shaming the creators, but I do think that this kind of thing isn’t as beneficial to a child as it seems at first glance. Once that girl is 12 she may want nothing to do with personal finance, solely because that’s what her parents are trying to get her into. But being into personal finance isn’t like getting into a certain type of music, it’s a life-long pursuit that should exist, at least in the background, of everyone’s life. Getting your kids to parrot back supposed financial wisdom is less likely to have a lasting impact and you run the risk of overwhelming (or boring) them.

In my opinion, the right way to approach financial topics with your kids is to first test their instincts and then ask them questions about their decisions.

I leave it at that, and I don’t repeat this experiment very often. As she get older I may continue to pose these types of scenarios and ask her to her explain her motivations. I suspect that eventually she will choose the waiting option and determine for herself whether it is worth it. Once the stakes change the motivation to wait for a reward increases and once I can get her brother involved things could get really interesting. I will then be able to see if his decision making influences hers and vice-versa.

4. Give your kids an allowance so that their money management skills have time to develop

So far, I’ve written a lot about avoiding money talks and steering more towards making personal finance a part of every day life. However, at some point dollars and cents will be mentioned and when that time comes, it makes sense to give kids an ability to earn. I really believe that the ability to earn money and spend it, with limitations, provides a type of motivation that is very hard to replicate elsewhere. My motivation to get decent grades in school was largely due to my parents expectations and because I knew I was capable of doing well in school. But that motivation wasn’t enough for me to get the grades I was capable of getting, had I given my best effort. I often crammed for tests and attempted to do homework in the moments right before a class started.

It wasn’t until I got my first real job that I felt truly motivated to succeed. I’m not talking about bussing tables while I was still living with my parents, I mean when I was in my mid 20s and I got my first real job in financial services. Now, my reputation would be on the line and my ability to produce results would be judged by people who didn’t know or care about me the way my parents did. You can’t recreate that moment for your kids, however, an allowance, if earned by some means, is a good way to test and maybe even challenge your children’s motivations. An allowance can also be used to demonstrate how budgeting works.

Related: The Best Free Budgeting and Net Worth Tracking Spreadsheet

5. Travel with your children to show them how people live in other countries

Throughout my childhood I had the advantage of travelling to other countries from time to time, to visit friends and family. I saw first-hand how the poorest people live, as well as some of the richest. My initial reaction was shock, both in the face of abject poverty and superfluous demonstrations of wealth, and in a place like India, where my mom was born and where these worlds often exist side-by-side, the disparity can be all the more apparent. I think it’s important that, at the very least, children have an awareness about how people live at different levels of society and in different parts of the world. Beyond that, they need to understand that a certain amount of money is needed to be happy but that earning a lot more on top of that doesn’t guarantee increased happiness.

Top 5 Ways to Use Credit Card Loyalty Rewards (and What to Avoid)
6 Steps to Establishing Excellent Credit
How To Move Long Distance & The True Cost of Moving
The 5 Best Money Moves to Make When Inflation Is High
The Valuist Financial Independence and Retirement (F.I.R.E) FREE Calculator Tool
15 Factors to Consider Before Picking Stocks, ETFs and Mutual Funds

6 Steps to Establishing Excellent Credit
The Valuist Investment Portfolio: The Only Free Lunch in the Stock Market
Why Excellent Clients Should Demand Excellent Service
The Average Cost of College: Evaluating Education As An Investment
Simplicity Is Often the Key to Financial Success
This Is Why Being Debt-Free Is Overrated: The Math Behind Opportunity Cost