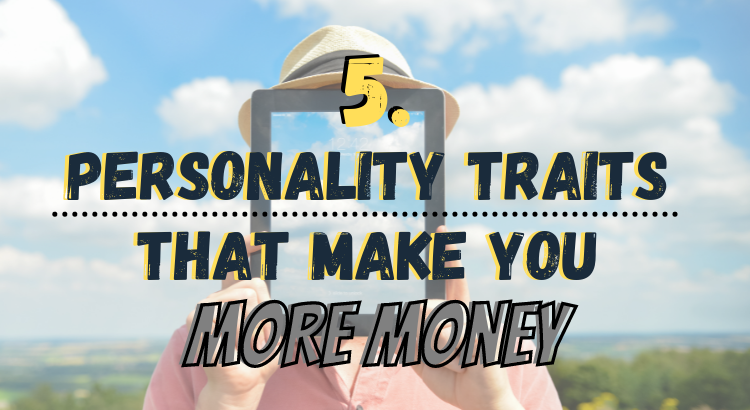 Being “bad” with money is not usually the result of stupidity, negligence or even bad luck. More often, being bad with money is simply the consequence of having personality traits that are better suited for other things. Studies like this one have demonstrated that some people seem to be born with an affinity for saving money and investing, while others lean towards instant gratification, even over a potentially bigger reward down the road. Not that there is anything wrong with personalities that aren’t naturally good savers. These personality types excel in areas that money savers don’t and are equally viable in society.

However, if you’ve been trying to make or save more money for years and are wondering why you haven’t been able to, it might just be because you lack too many of these money making personality traits. Though it’s definitely not easy to change aspects of your personality, there are ways to train yourself. I hope, anyways, because I am trying to develop some of these traits myself.

People with these personality traits typically have a higher net-worth

2. UNCOUNTABLE NOUN
Discipline is the quality of being able to behave and work in a controlled way which involves obeying particular rules or standards.

Having discipline is a great personality trait for making solid financial decisions, but if you don’t have it, discipline is a hard trait to develop on your own. The reason why developing discipline is tough is because it involves getting out of your comfort zone. Clearly you don’t need discipline to do the stuff you enjoy but you do need it to follow through with something that sucks now, for a potentially greater reward down the road. For example, in order to successfully fund a retirement account we are told save money, maximize tax-advantaged accounts and rebalance our portfolios from the start of our careers. Oh and we’re also not allowed to touch the funds for several decades. So how does a young investor get motivated to put away so much money that they won’t be able to use for such a long time?

For me the answer was in the structure of the Roth IRA. Roth IRAs allow investors to take out all of our contributions, tax and penalty free, at any time, because these contributions have already been taxed. Psychologically, the freedom of this setup allows me to view my Roth IRA as a savings account and my contributions as “money movements”, even if I don’t actually treat the account that way.

Zen Habits created a great list of ways to start developing self-discipline. I especially like the idea of starting with small actions. Instead of creating a list of insurmountable goals that you will probably avoid, whenever you are motivated to do something, just trying doing 10 minutes of it. I was surprised how easily 10 minutes became an hour once I just got started doing something.

In certain settings being competitive is perceived as a personality flaw. If you’re getting heated during a game of Monopoly, as I may or may not have, there may be a deeper issue at play. Though losing gracefully is skill I still haven’t quite mastered, I like to think that I am improving with age, and being competitive has helped me attain some of my career goals. The key is finding a healthy way to approach it.

Naturally competitive people (like me) may have a psychological need to distinguish ourselves from our peers, which in turn motivates us to attempt to outperform them. This is probably the reason that I don’t take many vacations and why I take advantage of every opportunity to demonstrate my value at work. However, having the right employer is also very important. Spinning your wheels somewhere that doesn’t recognize your value is a waste of time and you should focus on your exit rather than your output in that scenario.

As athletic trainers can attest to, even if competitiveness doesn’t come naturally, it can definitely be trained. The first step to developing a competitive spirit is to gain self-confidence, preferably through the mastery of your craft. Take an honest look at your output compared to your competition, and consider ways that you could set yourself apart. If you work hard enough, it’s easy to start recognizing your value and becoming more competitive. Just don’t go overboard with it, like I may or may not do.

Related: 5 Things to Do Before You Ask for a Raise

Being patient means being able to wait for a the right opportunity to present itself. Not a random opportunity, one that you have carefully cultivated. Being resilient means that you can withstand a storm, aware that it will pass and the sun will shine again. Both of these traits are interrelated and crucial for successful investing and career management.

For example, there’s only a few real reasons why a long term investor should lose more money than they have invested in the stock market:

We covered what it means to be “broadly diversified” in the post, How to Invest When the Stock Market Crashes. And, if we ignore short term factors like low stock price, being impatient / not resilient leads to decision making that negatively impacts your returns. Like the decision to sell stock during a stock market crash, thus “realizing” your losses. Similarly, being impatient/ non resilient can cause you to hop from job to job, or search for overnight success via “get rich quick” schemes or the lottery, causing you to lose valuable time that could have been devoted to developing skills and a reputation somewhere.

One way to cultivate patience and resilience is by being highly knowledgeable. If you know, for example, that the first years in almost any industry are bound to be difficult, but you are prepared for the specific obstacles in your chosen field, it’s easier to strategize wise career moves. Similarly, if you are aware that the stock market will crash someday soon but that it’s also likely to rebound afterwards, you are more likely to treat stock market crashes as buying opportunities rather than end-of-the-world scenarios.

Adaptability is essentially how well we deal with change and like the traits of patience and resilience, being highly adaptable suggests an understanding that change does not have to be debilitating. Rather, change often presents you with an opportunity. Given enough time, change is inevitable and how well we roll with the punches is important for solid decision making in investments, career planning and business. For example, the stock market could crash right before I’m ready to retire. Or, it could flourish when I just want a reasonable entry point. If I’m not adaptable I might exit the market at with a negative return so I can maintain my retirement plan, or hold off on investing for too long, thus losing out on years of large gains because I considered the market “overvalued”. In business, regulations can change that threaten how you operate, such as the, 7 Proposed Changes to IRA Accounts and How They Could Alter Your Retirement Plan, threatens to do for “self-directed” investment firms, like the one I work at.

If you are a slave to routine, as I have often been, becoming highly adaptable is a difficult, if not impossible, trait to master. However, with focused intent one can become more adaptable. In order to expand my powers of adaptability (and I still struggle with breaking from routine) I practice so-called, “rewiring.” That is, when something changes the nature of an expectation I had, I attempt to ignore ever present hard-wired self-messages and instead, repeatedly instruct myself to “be more adaptable” in the situation. It’s very difficult to content with your brain’s own self-fed messages but With enough practice rewriting my responses to myself, I find that I can endure sudden changes with much more flexibility.

Having foresight about large, sweeping changes in an industry or the economy can certainly be a valuable skill. Think of the guy who identified the housing crises before it happened and made millions. However, if you can’t maintain positive cash flow because your budgeting sucks, or if you lose time and money because you start a business without research, those premonitions are unlikely to save you. There have been a number of times that I’ve heard about someone I know starting a clothing company, or a restaurant and wondered if they did any research before undertaking such a risky venture – Mind you, I don’t know any clothing designers or chefs. A quick google search reveals that successful clothing companies are behemoths, with billions of dollars in their budgets to discover and define trends. You really can’t compete with them unless you already have an active customer base, and even then you will probably be operating on a small scale. Similarly, restaurants are notoriously difficult to maintain and have razor sharp margins so a talent for cooking home meals is likely not going to cut it.

From these examples the importance of developing a keen attention to detail becomes clear. You need to be able to use information to gain a competitive edge.

Here are some ways to hone your attention to detail

The Best Free Budgeting and Net Worth Tracking Spreadsheet
Harvard Extension School: The Backdoor to the Ivy League?
How to Access Your Retirement Money Early, Without Penalty
Why I Chose to Pay the Health Insurance Penalty and What it Really Costs
Why Excellent Clients Should Demand Excellent Service
5 Ways That Working From Home Can Make You More Money