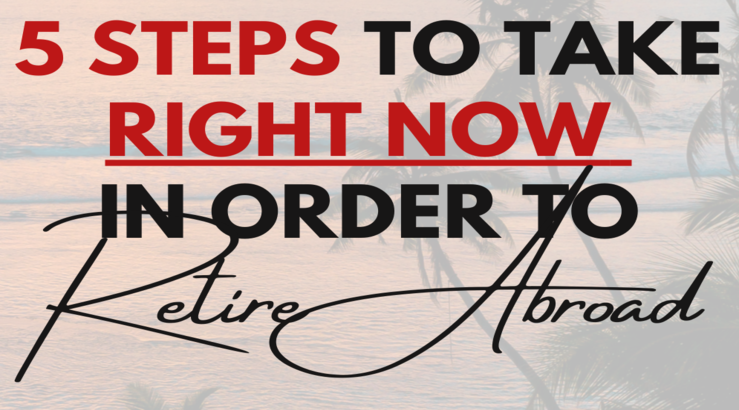 I’m constantly seeing news articles about how little money the average person has saved for retirement or an immediate need. According to these outlets, a $500 expense is enough to send most people into a debt spiral. Valuist covered how to best prioritize your savings and created this helpful infographic. However, on the other end of the spectrum, the so-called F.I.R.E (Financial Independence Retire Early) movement, has been building momentum for years.

F.I.R.E folks are focused on maximizing earnings, savings and investments so that they can retire as early as possible, while being flush with cash. You can usually spot them on social media by their inventive handles like, @F.I.R.E Breather or @Pants on F.I.R.E, both of which I made-up but likely exist. For the adventurous one of the best ways to attain F.I.R.E is to retire abroad, at least part time. Depending on where you prefer to reside, a significant change in expenses can translate to a much higher standard of living than you might otherwise be able to afford.

Or, perhaps you can quit your job much earlier than you thought possible. When you consider a life that you dedicate to your passions, while enjoying tropical beaches and new adventures, the thought of leaving your homeland is a bit less daunting. The idea certainly intrigues me. In fact, I just read a book about it, which in part, inspired me to write this article. So, lets look at:

The obstacles, potential savings and what you need to do now, in order to make retiring overseas a reality.

#1. Choose where to retire. The pros and cons of various options

If your goal is early retirement, it probably doesn’t make sense to retire to a country that has higher living expenses. You also don’t want live anywhere that falls below your standard of living – whether that relates to medical care, safety or anything else you prioritize. So here, I have provided some broad categories of places to retire to. Though you can’t easily generalize about peoples from multiple countries, on separate continents, the groupings below at least reflect some cultural, economic and cost of living similarities. This list is clearly not inclusive of all options:

Best Reasons to choose Latin America for early retirement
– There are endless adventures to be had and cultures to explore
– Expenses for food, transportation and housing are generally much more affordable
– Closer to home (for Americans) if you choose to be a part-time expat

Reasons not to choose Latin America for early retirement
– Medical care and financial services may be inconsistent
– Safety/security may vary wildly from place to place. As with any country, expats be cautious

Best Reasons to choose Asia to F.I.R.E (Is that a verb?)
– Greater access to world-class health care and amenities
– Expenses for food, are generally much more affordable
– Travelling between and within Asian countries is easy and inexpensive

The idea of moving somewhere and actually committing to it, often involve very different reasoning. When you’re fantasizing about days spent on the beach it’s hard to remember that you will actually have to find housing, pay bills and acquaint yourself with an entirely new culture. If you’ve never spent significant time in another country, you may even be overestimating your ability to adapt.

#3. Preparing a budget. How to model various scenarios

Do a cost of living analysis using the Valuist free budget tool to determine your spending rate, savings rate, and net worth. Then, using cost of living comparisons that you can find with a Google search, you can project how your expenses will change.

Once you have an understanding of how your spending will change, using your net-worth information you can more easily determine how far your nest egg will take you in various scenarios.

Even after visiting your prospective new home, doing research and preparing budget projections, you still may want to do a trial run before going all in with real estate. Buying real estate in another country may be complicated and require someone with a firm understanding of that country’s real estate market and the laws that govern property ownership. I am still haunted by the show I watched about a couple who built their dream home in Italy only to discover soon afterwards, that it had an illegal addition. In some countries your ability to own real estate is going to be limited by a variety of factors, including length of residence, citizenship, owning a business etc. So, it’s may be wise to start off with a month-to-month rental, learn what you need to know and make your most financially impactful decisions afterwards.

If you’ve considered everything else, and you think you are flexible enough to make the leap, there’s still one last step, the thousands of hours you will want to spend learning the language. Sure, you could probably get by with English in certain parts of larger cities in most countries, but you will always feel like an outsider until you have at least basic conversational proficiency in another language. Besides the ability to connect with another culture, learning a language is valuable in other ways too, such as with negotiations. Knowing another language also indicates to locals that you are interested in their culture and not just taking advantage of their lower cost of living.

Personally, I have spent several years learning French (followed by the 6th months it took to forget it) and more recently, I’ve been dedicating several hours a week to learn Spanish. My hope is to one day live part time in either Mexico, Central America or South America. Where exactly, I’m not sure and probably won’t be for a very long time.

5 Ways That Working From Home Can Make You More Money
15 Factors to Consider Before Picking Stocks, ETFs and Mutual Funds
What Your Real Estate Team Should Be Doing for You When You're Buying or Selling a House
The Right Way to Teach Your Kids About Personal Finance
Poor, Cheap or Minimalist?
The True Cost of Buying a Home

5 (More) Money Mistakes You Can’t Afford to Make
5 Times When Big Spending Pays Off (And 5 Times It Doesn't)
These 5 Personality Traits Make You More Money in the Long Run (And How to Develop Them)
The Valuist Financial Independence and Retirement (F.I.R.E) FREE Calculator Tool
The True Cost of Buying Overpriced Whole Life Insurance
How to Buy Houses in a Highly Competitive Real Estate Market