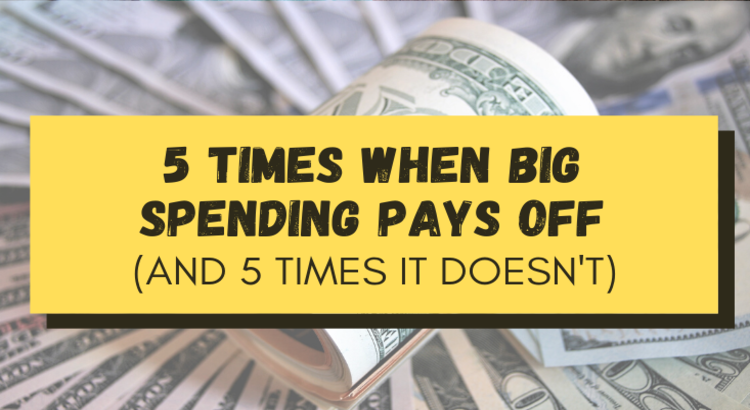 A colleague at the investment firm that I work for sometimes pokes fun at the Valuist philosophy. He probably thinks I am a penny-pincher. However, the truth is that I’ve been spending a lot of money lately. The main difference between a so-called Valuist and a frugal(ist?), is that a Valuist seeks to maximize value, and recognizes that time is the most valuable commodity. Someone who is overly frugal probably wastes more time than they can tangibly recoup. Being a Valuist doesn’t necessarily mean that I’m poor, cheap or a minimalist.

Maybe I’m a little weird, but I don’t often get a buzz from buying stuff. Not nearly as much as I get from seeing our savings rate go up anyways. As I detailed in 15 Money Mistakes You Can’t Afford to Make, I try to minimize our monthly expenses as much as possible. And though we love to eat out, and we do get that expensive local farm milk, for the most part our extraneous spending is minimal. So, I suppose I can see why I’m sometimes labeled a cheapskate. I’m always talking about how unnecessary most spending is.

But take a look at what I have been spending money on:

After spending almost $39,000, in cash, over the last 12 months it’s hard to take the cheapskate label seriously. Recently while watching an old show, Extreme Cheapskates – you can watch season 1 for free on TLC but it gets pretty gross – I had a revelation. You can be too frugal. Being a Valuist demands a balance between comfortable living and reasonable savings/earnings. I value saving money and reducing the amount of stuff we acquire, but not if I have to live in squalor. Obviously, not everyone’s idea of “squalor” is shared, however, I think we can agree that dumpster diving is at least a deviation from a cultural norm (of not being gross). I also realized that I’d rather work less (and potentially earn less over the course of my career) than to side-hustle my way to conspicuous consumption.

This is especially true as I have gotten older, and as my focus is fixed on supporting my growing family. When I was younger the idea of backpacking around the world on a shoe-string budget seemed like an incredible adventure. However, after spending several months solo backpacking in Nepal, India and France, I’m not sure I could do it again. Not like that in any case. These days my travel searches typically start with the words, “all inclusive.” As the film, My Dinner With Andre espouses (if anyone even remembers it), your baseline level of comfort dictates how you lead your life, and it changes over time.

Now, with a, hopefully, more leveled perspective, I have identified 5 times that spending more money than you have to is better in the long run.

Any time we need landscaping or have a construction project I get multiple quotes. The process is time consuming, but it is nearly impossible to determine a reasonable price without first talking to several contractors. If you’ve ever tried googling, “the average cost of landscaping,” the range is anywhere between $5,000 – $25,000, which is not especially helpful. Clearly, this is because the search is too broad, however, you can’t really get a good sense of local prices from google regardless of what you search. Another good reason to get multiple quotes is that you can spot when someone is trying to take advantage of your naivete. I’ve literally had guys drop a quote by $7,000 after hearing that I’ve already received a much lower bid.

So, though I don’t suggest going to for highest bid I would also try to avoid the lowest quote unless the work comes highly recommended. Recently, when negotiating a landscaping job we agreed to pay nearly $2,000 more than the lowest quote based on the fact that the higher bidder was helpful, flexible on price but only to a point, and he came recommended. We had the opportunity to see both contractors in action in our neighborhood which affirmed our decision.

If you are too busy making money to mow your own lawn, fine. Otherwise, owning a house typically requires some work on the home-owner’s part. You could pay someone to shovel your drive, mow your lawn or tend to your plants, but doing these things yourself is likely to increase your happiness and save you a lot of money over time. Our home was built last year and is still warrantied and we were offered the choice of continuing with the home maintenance package for $500 per year. $42 per month is a lot for someone to come change our filters and check seals every three months.

2. Spend Big On: Professional Gear (If you’re a professional)

Once you go pro, spending big on the tools of your craft is likely to be a wise long-term investment. I am a pianist and former private music trainer and when we were moving we were offered a few free pianos by well meaning friends. However, not all pianos are made for the same musician. Though the never-tuned knockoff brand piano sitting in your living room may be nice to set drinks on, a trained player requires a finer instrument. Thus we spent $5,000, instead of nothing, and I don’t regret it for a moment.

Don’t Waste Money On: Professional Gear (If you’re an amateur)

On the other end of the spectrum are those who immediately buy the best gear, perhaps before even taking a lesson. Growing up, my friend was getting into riding bicycles so his wealthy parents bought him a $5,000 Gary Fischer mountain bike. I don’t think I ever saw him ride it, at least not enough to warrant the cost. A lot of people get the best gear in attempt to persuade themselves to follow through with a goal. This is usually a losing proposition, you have to be willing to put in a lot of time to building a skill before the quality of your gear comes into play.

I have the opposite mentality, though likely, equally as ludicrous. In high school I used to show up to tennis practice, and even some matches, in sandals. I pride myself on seeing how good I can be with the worst equipment. I always thought it was much cooler to be the guy who could beat you in table tennis, while playing with a boat oar, rather than Mr. sponsored gear. Tangentially, I see a lot of cyclists bespattered with brands but if your gut is hanging out I somewhat doubt that you’re really sponsored by those companies.

There’s a reason why they say that it’s not hard to treat HIV if you’re rich. Unfortunately, money is still a barrier for those seeking world-class health care solutions. However, there are health and safety options that the average person should take advantage of. For instance, choosing the right health care package, based on your financial situation, can be crucial to mitigating huge medical liabilities. Also, choosing to eat higher quality, healthier food may cost more now but is likely to save you money in health care costs in the long run.

Similarly, as I wrote about in 5 Money Hacks That Don’t Actually Save You Money, not only is buying an ancient car likely to cost you more over time, by opting for an outmoded vehicle you are missing out on some pretty significant modern safety features, like air bags.

You can spend a crazy amount of money on stuff that doesn’t even work. Like anything that claims to reduce “toxins” for instance. Ask a doctor what a toxin is (it’s apparently a marketing term) or whether a “cleansing” enema is actually good for you. I once had a client who spent $6,000 on a reverse osmosis water treatment for use at home. This was a trucker, so he was rarely home and he had tax debt exceeding $25,000. To be fair these water system aren’t really pseudo-science, and as far as I can tell they do what they are reputed to do, but they are total overkill for residential applications.

I love this one because I don’t actually consider long-term investments as “spending” at all. Psychologically when I look at my tax-sheltered investments as merely money being allocated to other accounts, I don’t feel like the money is being spent. This is especially true for a Roth IRA, as contributions can be withdrawn at any time without penalty or the recognition of taxable income. This won’t work for everyone, many people need to mentally characterize long term investments as “untouchable,” so it may be better for them to look at these funds as spent. For me though, the thought that I am simply moving money around is comforting.

For me, any investment in individual stocks is a gamble. That’s mainly because I don’t really have the technical knowledge, or the risk tolerance, to buy them confidently. I also feel that the majority of people who purport to have special knowledge of future stock performance are fooling themselves. You can spend an inordinate amount of time analyzing stocks, but your chances of outpacing the return of total market are very low. 92% of active investors can’t even do it for 15 years and my investment horizon is nearly double that. I’m happy to match the market’s performance via VTSAX, or an S&P 500 fund, because at least with such a diverse holding I can buy confidently when the market crashes.

Vacations don’t have to be expensive but they should always be taken. There’s no honor in never having missed a day of work and if you’re so busy trying to become a millionaire that your life is rapidly passing you by, consider what you are truly working, or living, for. Of course there’s nothing wrong with working hard, without hard work nothing remarkable is ever accomplished. But you’ve got to enjoy the journey. I say that we should all spend more money on the things that bring us together. It is those things that we will remember at the end of our lives, not how many days we dedicated to realizing someone else’s dreams, or wasted because we didn’t know when to move on.

My biggest revelation from spending too much time on Twitter and too much time watching old cancelled TV shows, is that making money is relatively easy if you can motivate yourself to work hard, but you can never make more time. You will find no shortage of so-called life coaches on social media telling you that you should be spending every waking moment side-hustling, working for yourself and pursuing “the dream,” but take care not to dream yourself into an early grave. My new goal is not to work harder, but to earn enough in a standard 40 hour work week to truly enjoy the rest of my time. I will always endeavor to improve myself and try to monetize the things I love to do, but I am now much more focused on cherishing the most precious resource I have, my time.

In Bad Company: How to Win a Protest
5 Things To Do Right Now in Order to Retire Abroad
The 5 Best Ways To Make Money While You Sleep
Poor, Cheap or Minimalist?
5 Money Hacks That Don't Save You Money (And 5 That Do)
The True Cost of Buying a Home

15 Factors to Consider Before Picking Stocks, ETFs and Mutual Funds
The 5 Best Money Moves to Make When Inflation Is High
What Your Real Estate Team Should Be Doing for You When You're Buying or Selling a House
15 Myths About Recycling, "Going Green", and Sustainable Living, Debunked
These 5 Expenses Have the Biggest Impact on Your Net Worth
The 5 Best Ways To Make Money While You Sleep